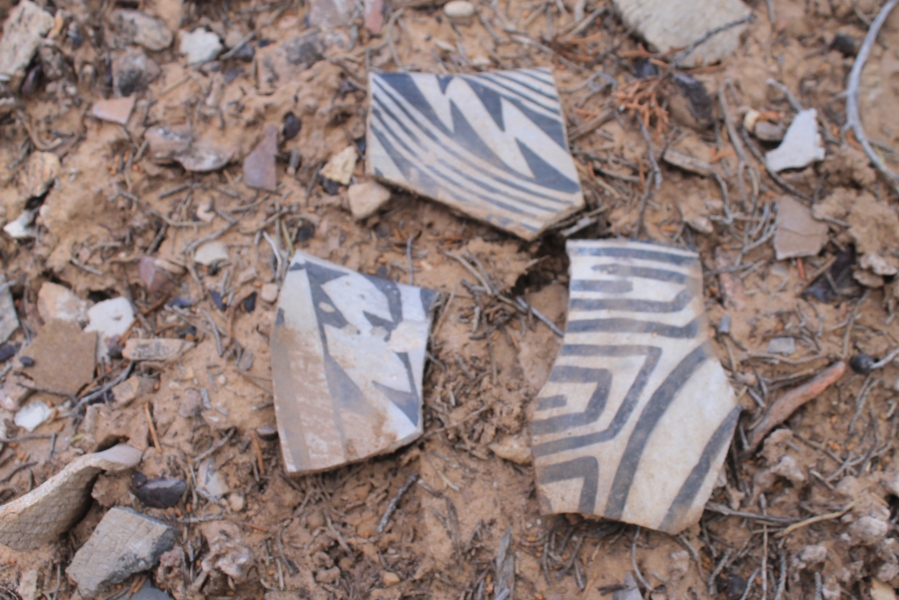 JL: How do you perceive culture relative to homeland?

LB: Culture relative to homeland is a big idea. Homeland is something that is always in the back of my mind. I’ve been fortunate to be doing a lot of archaeological survey work beyond the political boundaries of the reservation in areas Hopi consider to be their true homeland. People have asked me to draw maps of what is a homeland for Hopi, and I find it difficult to connect the dots and say this is the boundary. I’m always more inclined to use a dashed line or some symbol that indicates that it’s ephemeral, in a sense. When I’m out doing my archaeological survey, I see the artifacts, the assemblages that our ancestors used, and in a way that signifies our homeland. As a Hopi person out there in the landscape you really get a true understanding that our homeland extends across the Four Corners region.

As a culture, you really have to be cognizant of what our ancestors were doing. My father and I have been out during the hunting seasons. When I come across an archaeological site, as an archaeologist what interests me is scouring the ground and seeing what kind of artifacts are there. I look at the pottery, I find arrowheads, projectile points. You find room habitations. I go back to camp at the end of a day of work or a day of hunting and I talk with people. My father will look at the artifacts I show him and he’ll say, “Just think. They survived out here with far less than we have now.” And in that sense, they knew more than we do. Could we transport ourselves back 800 years and survive as they did with what we would term primitive tools? At the time, that was the cutting edge of technology.

There’s a deep spiritualness in just sitting in the woods, sitting on a hill, watching the sun rise, watching the sun set, watching it go across the sky. Unfortunately, we’re not exposed to that on a daily basis. I go to work, I go to the office; I’m in an enclosed space. But I’m really fortunate that, in some of my other work, I’m able to be a daily part of what nature really is and get a true sense of experiences of Hopi ancestors that have led us to be where we are today in the world. It’s a real deep thought process. It’s one of those things I’m always rehashing in my mind.

I recently came back from working on a survey project over in the Walapai country west of here a couple of hundred miles. During this project, we came across artifacts that showed they were living in a different lifestyle compared to what we find here around Flagstaff or northern Arizona in the Four Corners region. They’re still Hopi ancestors—that’s how we perceive them. But how did they come to that type of technology? How was it that they viewed their own world perspective that directed them to become who they are?

So it’s a broad landscape in terms of that concept of culture as homeland and how we relate to the environment, what we take from it, these experiences and how we use them in our modern-day lives to kind of direct how we live now.

You talk about the commons, about borders, but those borders are arbitrary in some sense. We’re all a part of these landscapes, whether we’re Hopi or Anglo or Walapai, Navajo, Zuni or whatever our ethnic background is. We all have impacts in some ways on these landscapes. Through my archaeological work you see that. There’s a lot of research about how prehistoric peoples changed their landscape and what can we learn from some of their mistakes.

Chaco Canyon has been used as a prime example of landscape change initiated by human interaction on a wide scale, and how the impacts prehistoric populations were having on the landscape led to their demise, so to speak. What can we learn from that? That’s one of the things Hopi stresses a lot in our teachings, that there are a lot of good things that came from our ancestral history: positive values and philosophical ways of thinking. But there are also some negative lessons we have to own up to and take responsibility for that will teach us.

How are we as modern Hopis and as a society going to interact with our environment? For me, that’s where culture as homeland comes in. I get to see this huge landscape across the Southwest. I get to see how prehistoric peoples were living in landscapes separated by two, three, four hundred miles. They all had to understand that they had to live within their means. In some instances, they didn’t live within their means, and that caused turmoil and chaos and caused things to go wrong for themselves and their society. You tie all of that together, you bring all of these different examples within the Southwest of prehistoric cultures experiencing good and bad changes, and I think that’s what Hopi is trying to remember. So there’s a lot tied into that idea of culture as homeland. That is the common foundation that we all have to live by, I think.

JL: I’ve got a question apropos of that. You have a deep, deep sense of your home culture, Hopi culture. You also have a pretty profound sense of—how to call it—monoculture, which is fast turning into global culture. Can you characterize what you see as the differences between the two points of view? There are probably more than two points of view.

LB: Well, I guess in some ways Hopi culture is what I’ve been taught, and it has kind of instructed me as to how I should live. It’s about that concept of sustainability, knowing what your limitations are as an individual and as a society, as a group of people living in a specific area. You look at Hopi culture; we’ve come to understand that we live in a desert environment. That understanding means that we have to live a certain type of lifestyle that doesn’t push the limitations of the environment. You look at our farming lifestyle, what we’ve been able to achieve with our agricultural products, most importantly corn. The corn is a direct product of us living in this desert environment. It’s well known that Hopi have strains of corn that are drought-resistant, grow well in desert environments and are suited to the types of soil we have.

Then, with that come all of those philosophical ideas of understanding. We all hear that term now—“water is life.” That’s part of the basic foundation of Hopi cultural perspective; it’s one of them, there are multiple. I think that the landscape dictates how we structure our world view and come to terms with where we choose to live. Take Phoenix, for example. You drive down the valley and get past Black Canyon City, and immediately, within five, 10 miles, you start to hit all of the outgrowth, the subdivisions that are popping up. How are they going to be able to sustain those communities, not only with water, but just in terms of basic resources?

I don’t know if people really understand the limitations they’re pushing in certain environments. I think there’s a contrast there in terms of how Hopi have viewed understanding our limitations versus a monoculture or dominant culture relying on technology to see them through. As we all know, technology will only get you so far, and it comes down to human ingenuity and perseverance to see you through some of the harder times.

That sense of having a spiritual basis ties into that as well. You really have to have faith, not so much in the technology, but in your own understanding. As Hopi, we understand where we live. We live in a desert. That sets our boundaries. Does the rest of society also have that boundary, or are they just kind of living in a bubble that they keep blowing bigger and bigger and hope that it’s not going to burst? I think that’s one of the basic differences I see between Hopi versus the outside dominant culture. I think maybe there are always a few people who realize the imminent danger of what’s going on, but they are few and far between; their voices aren’t heard, and progress is always put ahead of sustainability.

I see that at home as well. Even as Hopi we have to be cognizant of our own progress in terms of development. We have limited resources. Unless some worldwide catastrophe happens, we’ll never go back to those days of the ancestral sites I visit. We’ll never be living in those types of conditions, unless we bring it upon ourselves. So we’re in an almost cyclical way of thinking. Are we just holding onto certain things, the good parts, and forgetting some of the negative changes that were brought upon us by our own actions? We have to learn to apply these broad philosophical ideas of how to live to our modern way of living.

I think that a lot of people for a number of years have looked to Hopi as a model of how to live sustainably. If we can do it in such a limited environment with limited resources on a small scale, maybe those types of examples can be applied to the larger global society. And it’s not just Hopi but all of those indigenous cultures around the world that have learned the hard way. We didn’t have the technology we have now. Whatever the Earth provided is what we lived off of. We weren’t able to coax more from it. So I think as a Hopi, and listening to other Hopis talk about how we’re supposed to live against how the modern society lives, that’s one contrast I can see in terms of using one as an example to help the other.

Lyle Balenquah has a Master’s degree in Archaeology from Northern Arizona University (NAU) and rows his raft down the San Juan, Green, and Colorado rivers. Bioregional documentarian Jack Loeffler and his daughter Celestia Loeffler’s recent book is Thinking Like a Watershed.www.loreoftheland.org